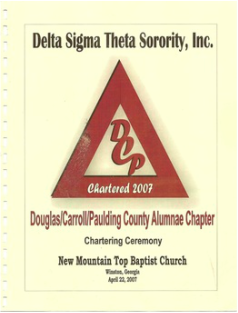 In the Spring of 2004, the journey of the formation of the Douglas-Carroll-Paulding Counties Alumnae Chapter of Delta Sigma Theta Sorority, Inc. began with the chance reading of a flyer announcing a gathering of Delta women committed to serving western counties outside of Atlanta, Georgia.

Quickly through word of mouth and chance meetings of sorors in malls, churches, schools, medical facilities, etc., the interest group began to gain momentum. In January 2006, the group met with the Regional Director, Soror Cynthia Boyd and the North Georgia State Coordinator, Soror Sandra K. Horton to discuss the feasibility of forming a chapter to support Douglas, Carroll and Paulding counties. In addition, alumnae chapter representatives from Henry County, and knowledgeable sorors from East Point/College Park, and Marietta/Roswell provided guidance and support to the interest group.

The interest group members quickly came together in support of the common goal – to establish an alumnae chapter to support the counties of Douglas, Carroll and Paulding. Sorors who were Members-At-Large, reclaimed sorors and those who were financially active with other established areas outside of the requested service area combined their talents to facilitate the establishment of the alumnae chapter. Through continued active involvement with alumnae chapters of Delta within metro Atlanta, informal gatherings as an interest group,and consistent email messages to reinforce the goal, the group continued to grow and move forward. The interest group gathered monthly to foster sisterhood, learning and partnership. The group actively participated in local community initiatives representing Delta (as individuals). Some of the areas of focus were Breast Cancer Awareness, AIDS Awareness, the NAACP, and Voter Registration. Interest group members also attended cultural events with the Cultural Arts Center and the Douglas County Connection as well as patronizing many new restaurants in the area as a group.  During the holiday season, the interest group delivered teddy bears to sick children in area hospitals and Thanksgiving baskets to persons in need.

The interest group book club led by Sorors Shanay Davis and Sheena Travis-Bell helped foster sisterhood and provided some informal dialogue and self-discovery.  A financial seminar hosted by Soror Anneliesa Finch provided new learning on fiscal responsibility to those who attended.  The interest group presence was also visible at the Douglas County Child Abuse Rally.  The interest group also collected toiletries for the victims of Hurricane Katrina through the local churches.  The group also supported the metro Atlanta chapters’ activities like the arrival of the National Chaplain Vashti McKenzie as the guest Women’s Day speaker at Wheat Street Baptist Church in Atlanta.

The interest group demonstrated its commitment to Delta and proved to be up for the challenge.  The sorors continued to communicate informally, participate in joint ventures with community agencies while supporting Metro Atlanta chapter initiatives. The interest group received official notification of the approval to establish a chapter supporting Douglas, Carroll and Paulding counties in March 2007.

The date, April 22, 2007, was set for the installment of the new alumnae chapter to continue the legacy of public service in Douglas, Carroll and Paulding counties in Georgia, building upon the legacy of service established by our 22 founders of Delta Sigma Theta Sorority, Inc.